Top 5 Electrode Tips for a Successful...

Last year, a friend and I decided to buy a Groupon for a beginner’s salsa class at a beautiful dance studio here in Vancouver.

There was an even mix of males and females but initially we all learned several moves independently, lined up side by side facing the instructor. These seemed easy enough, with the whole class flowing together as we stepped from side to side.

The next phase of the class was a partner circle, where the females rotated around the room practicing a specific sequence with each man. This quickly became an eye opener for me – no matter how coordinated I felt when I was working independently, the success of the sequence fully depended on the male’s lead!

Most of the men understood how to give cues but there were only a select few that were able to direct me clearly. When partnered with these strong leads, my movements went from being cerebral to intuitive – I was able to move through the sequence without thinking about it.

Months later, I accepted a UBC physiotherapy student for a 5-week clinical placement at Kids Physio Group. We were co-treating a very sweet 8-year-old boy diagnosed with cerebral palsy, who’s main goal is to improve his balance. First, I demonstrated how to spot him as he stepped in and out of wooden boxes, guiding his movements to be as smooth as possible. Then I watched the student try this herself – the whole situation looked awkward and this boy was much more off-balance than normal!

I struggled to think of the best way to describe the spotting technique (which was tricky for me when I first started working with him three years ago), and I found it difficult to articulate as much of the technique is based on intuition. I tried several explanations, and then this popped into my head: being a good spotter is like being a strong male lead in salsa.

The main goal of both roles is to facilitate the best movement patterns possible using a hands-on, non-verbal approach.

• As most of us know, watching a task is VERY different that actually doing it: those salsa instructors make it look so easy as they twirl, spin, and shake their hips back and forth. Sometimes, when the male partner was unclear in his cues, I ended up getting lost in a flurry of arms and legs. This emphasized the necessity of allowing students as much hands on time as possible, rather than just demonstrating a skill or having them observe me.

• Cueing natural movement is much more effective than verbally explaining the task. If my salsa partner said “left foot step, turn to the right, place your hand here”, I would have become so overwhelmed! Similarly, I’ve found that guiding a squirmy off-balanced child to move in a desired way takes practice, but once that comfort level increases, the child’s learning rate increases dramatically.

• To be a reliable spotter, YOU must have a strong, reliable ‘frame’. This is one more reason on a long list for you (as a dancer or a physiotherapist) to maintain some sort of movement practice and learn how to activate your inner core to stabilize yourself.

• When facilitating movement as a physiotherapist, you must quickly determine the appropriate level of support to give the child. Too little physical assistance sets the child up for overexertion leading to compensatory patterns, and over-spotting results in minimal gains for the child. A lack of smoothness can be frustrating for the child, as they feel like they’re being pushed around at someone else’s pace, not theirs.

Challenge: Try to lead a friend around a room by only holding his/her hand out in front.

• How does he respond to you pushing/pulling/leaning?
• How does his performance change when you stand close or far?
• Note the effect of varying the amounts of tension or force that you provide – any difference when the friend’s elbow bent at his side, or outstretched in front?
• If you’re feeling confident, you can try these drills above with your partner blindfolded.

It is SO important to try out various forms of movement and exercise for yourself as a therapist, as you never know where you’ll get your next inspiration for your practice. Salsa, parkour, mixed martial arts, yoga, and rock-climbing have all taught me something different that I’ve incorporated into my physiotherapy work. Move! In as many different ways as you can, so you can help your patients to do the same. 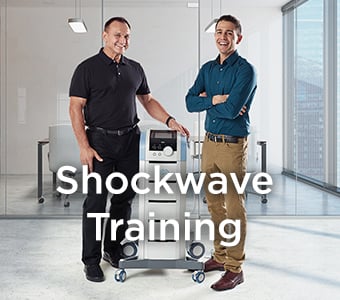 A Dry Needle Built for Physiotherapists